You are here: Home / News / Our Outdoors: At Season’s End 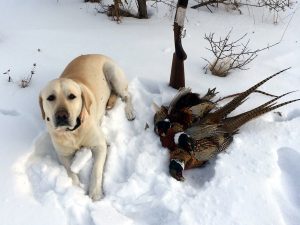 Our Outdoors: At Season’s End
By Nick Simonson

On the slope to the farmstead and the western horizon, the reason for the lack of flushing pheasants became clear.  A golden wall stood at the end of the snow-filled drain where the mostly frozen creek flowed down to the small impoundment where my lab Ole and I started our final walk of the hunting season.  Between clumps of grass and the occasional field rock revealed by the recent mild weather, three-toed tracks darted in and out of the snow covering the iced-over trickle.  Some prints were locked solid in a frosty crust from days before, others were fresher and suggested a set of sprinting birds ahead of our pursuit.  As the cornfield at the far end of the draw came into full view, Ole’s tail whirred like a helicopter blade and he approached a clump of bushes no wider than the pickup truck we arrived in.
Suddenly a blur of beating wings thundered out of the tiny piece of cover as five, then ten, then fifteen or more hens and roosters took to the air while he dove in and I sprinted to get into my little scattergun’s range.  I paused as he worked the heavily-scented area, expecting one last bird to rise.  Instead, the end of the bushes on the far side of the draw began to explode ahead of us as a dozen, then two, then three, then a rattling blur of fifty or more birds busted out of the end and headed toward the rolling hillside of unharvested corn.  Again at full sprint, I resumed the chase with Ole at my side for a few strides before he broke from me and sent a trio of hens up the hill and a rooster doubling back behind us on the far side of the buckbrush.  Realizing the final stop on the drain, filled with cattails and the last thick cover was all that was between us and the frozen crops, I continued the charge behind my dog and watched as another twenty or thirty birds took to the sky at the end of the small slough well ahead of us.
As I came to the fence dividing the head and the run of the draw, one lone rooster rose in front of me, and I sized up the shot, touching off the first barrel which sailed over the crowing bird.  The second salvo was true and with a puff of feathers it fell at the end of the field for Ole to retrieve.  We met on the far side of the brush which grew on the southern tip at the end of the draw and I tucked the longspur in my game pouch, then bent over to pet my dog and pause after the wild run.  Replaying the rush, it was everything a hunter expects in late season.  Challenging tromps through white drifts, spooky colored birds that take off en masse when the first one decides to get flighty, and once in a while, one rooster that apparently overthinks things, stays put and provides a bit of a reward for a hard working dog and his hard breathing owner.
The remainder of the hunt would be notable for being completely the opposite of how the mid-day trek had started.  Dogged winding in-and-out inspection of hillside bushes by the yellow-furred detective on our return walk produced a pair of roosters which provided only a slight window through the branches of the barren stands of brush.  In a manner that was more akin to a ruffed grouse expedition, I snapped up and dropped both birds in an instinctive manner that had eluded me for much of the upland season.  With two retrieves to hand, I loaded up my vest and headed down into the final ravine, double-barrel cracked over my shoulder as I side-stepped my way along the frozen hillside deer trail which traced the flow of the main creek on the property.  Pausing in a small opening of the hillside treeclaim to balance out the birds for the final half mile back to the truck and give my dog a squirt of water, I jumped as one final rooster burst from cover along the frozen flow and chuckled as Ole darted away from me and after the beating wings.  I let him go a few extra yards before calling him back with a reassuring laugh and a pat on the head, knowing that the sprint would likely be his last of the season…in our outdoors.