A year ago, the pike ran so thick at the end of the late spring it almost seemed likely that one could walk on their backs across the surface of the water below the small rock dam.  This year, under the warm white light of the mid-April sun against a pure azure sky, however, they were nowhere to be found.  The pair of buffalo that came to the large jigs of the anglers across the flow, and the quiet retrieves of my favorite gaudy streamers at the end of my fly line led me to believe that I had missed this season’s run on the small tributary, which had provided one of the most memorable days on the long rod I’ve ever had the year before.

That’s the tricky thing about fishing memories. No two seasons, nor really any two days, are the same.  Trying to time the run of anything is like trying to time the stock market for some super windfall.  The weather, the fade of winter and the coming of spring and a variety of other factors that go with that seasonal shift – water temperature, sky cover and the like – delay or expedite the pre-spawn rush of fish in any given water.  Unless a person is on the bank or in the boat every day, it’s tough to peg just when that same set of circumstances will spur fish movement and angling in the memories of what was last year, or a few seasons back, or even a decade ago as recorded in a fishing journal or smiling pictures from days gone by rarely leads to a repeat day in the present. 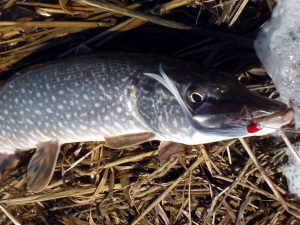 That’s not to say, however, that there aren’t patterns which have less to do with time and more to do with place.  Structure that holds smallies, gravelly transition areas that act as a magnet for walleyes, reed beds that draw springtime crappies, and docks that provide mid-summer havens for largemouth help provide seasonal starting points that, with the right timing at some point in the openwater season, will hold fish. It’s merely a matter of getting there as things are setting up or settling in.  The more stable things are and the more in the middle of the season they are, the more likely it is to find fish in familiar haunts, keyed by things like water flow, forage availability and protective or ambush cover to hide from predators and take a quick swing at prey.

The concrete factors like structure are less memory-based, and more situated in logic.  It’s fishing from knowledge of how structure or breaks in a current attract fish in comparison to fishing from the memory of a great day on the water that ultimately results in more consistent hooksets.  While the latter probably stems from the alignment of seasonal factors with the structural, forage and other elements of an environment, those factors alone usually provide for a good day anyhow.  When they do align, those good days become great – even memorable.

In the end, each spot of memory is worth a cast or two in an attempt to recapture a sampling of that time that all those crappies were schooled up a few feet of a bridge piling, the walleyes foraged just a foot or two under the surface of an inflowing creek, or the pike were stacked like cordwood in the uppermost portion of their spawning run.  When met with just shadows of what that one moment in time held, however, focus on the more tangible factors in a water.  Cast at the things that are there and not just the fleeting thoughts of super days in the past.  Focus on the here-and-now, what can be determined that fish are relating to, and how things are set up at this point in the season to find whatever spring species you might be angling for.  With focus on those factors, and a little bit of luck, there will be another shot at making one of those memorable days…in our outdoors.