You are here: Home / News / Our Outdoors: In Memory 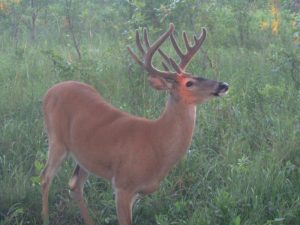 Like most of my minor honey-dos from the end of year, going through old clothing to donate to the local thrift store ended up getting done two months into the following tax calendar; mostly due to deer hunting and some late season pheasant tromps that took up the last seven weekends before the end of December. No matter, the box of shirts, old jeans and a couple of sweaters will still likely be worth the same on next year’s filing as it would have been on this one, save for the fact that as I sorted through the faded tees and holey pants, I was afforded a free trip back in time.  While pulling a pair of jeans out of a sorting basket and whipping them up into the air to shake the dust from them before folding them into the donation box, a small blue square came flying at my head.

Dodging the whizzing piece of plastic shrapnel, I glanced over my shoulder as it clicked against the wall in the spare bedroom and came to rest on the carpet.  Identifying it in part by the faded white-and-blue label and the permanently grass-stained pants which I used to wear in the field a few years back for deer stand work, I pegged it as an old trail camera card.  Judging by its size – a mere 2 GB, so small they aren’t sold in retail anymore – and its pants of origin, I figured it was about 7 years old.  Having only owned two trail cameras at that time, I narrowed down my thoughts as to what was on it.
Plugging the chip into the side of my computer, I wasn’t far off in my guess as the time and date stamp of the 260 photos ran from late July until mid-August of 2014.  As I began the click through process, a feeling of nostalgia came over me, like opening an old pack of baseball cards and going through the now retired rookies, complete with mouth-shredding crunchy pink bubblegum. While I recognized a couple of the deer on the card, as I had saved their photos from previous and subsequent series for recall on stand, I was surprised to see a few that, at least by the more imperfect memory card in my brain, I could not recall or had never seen.

The grass and surrounding saplings in the small meadow were verdant with the green of midsummer and the deer, entering prime velvet stage, had massive looking antlers, despite only one of them truly getting into that shooter category.  As I flicked back and forth through the three photos of the 5×6 whitetail, I couldn’t place him and did not recall if I had ever seen him that season in the image browser or on my stand.  Certainly, I figured I would have remembered if the latter encounter would have occurred, knowing my penchant for buck fever and inexperience at the time. His head raised slightly in the photo as if beginning a scent check of the August evening gave his eleven tines a sense of regality.  It was a brown crown and a badge of honor earned in a location where he most certainly had evaded a number of the slug hunters in seasons before, and certainly my eye from the nearby bow stand on the corner of the opening in the tree claim.

There were other deer of note as well, and I pulled up pictures from earlier in the summer of 2014 which I had saved to an old portable hard drive and filled in the stretch between their early season development and how their antlers finished out those days just before the archery season began. The sense of nostalgia faded into a slight melancholy as I thought of those deer, now likely long gone, but hopefully living on in generations sired that autumn and maybe, with some luck, in the Novembers that followed.  Their images spurred memories of a distant time in my hunting career and they brought with them the hope I often felt on the light-footed summer evening hike along the cornfield to swap cards, and the stealthy haste I would make back to the truck to impatiently look through them on my computer, which I’d pack on the trips for a more instant form of gratification, instead of waiting to view them at home.

Having run through the collection on the card a couple of times and copied the better photos to an image folder on my desktop, I hesitated to delete the digital contents of the small storage space, as if that would somehow keep those deer alive forever.  I popped the card from the computer and shifted the small yellow tab down into the locked position and simply wrote “SAVE” in black sharpie on the card and placed it in a small box at the back of my writing desk drawer.  That way, in addition to what I had held on to on my laptop, those deer that had wandered through the area in the gray light of dawn and dusk the heat of mid-afternoon or the reflective infrared-captured night hours would always be there and always be a part of my experiences. Even if they were seen better late than never, in our outdoors.