There’s that moment of anticipation in early spring which transcends time.  It occurs after the grill has been fired up in the first warm evening and is preceded by the sizzle which triggers some primordial salivatory response as red becomes pink becomes that ideal singed-brown-and-black-striped.  Just before a perfect medium-rare chunk of meat comes from the flame and onto the plate, it appears almost suspended in a moment which becomes a front bookend for a warm-weather season full of outdoor cooking to come.  In that instant, with fork and knife raised and napkin tucked firmly in collar, all the world is paused. 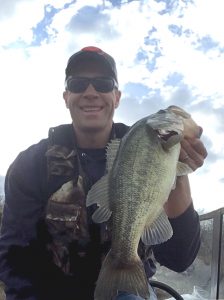 I imagine that’s what a jerkbait looks like to an aggressive spring largemouth after a couple of hard rips over a shallow flat, or a smallmouth awakened by the motion from its cold-weather slumber on some creek delta or a walleye drawn in by a series of twitches over a rocky shoal in some prespawn staging area at dusk.  It appears the same as the steak to a meat-eater: a delicious hunk of food suspended in time, appearing out of nowhere but suddenly the center of the world, held steady a few feet under the surface.  It is in that moment of the pause too that fish can’t seem to resist a jerkbait, like the Rapala X-Rap or Husky Jerk, that sets the stage for what’s to come – a powerful take that doubles a rod over in one of the early season’s most exciting hooksets that often occurs half-surprisingly as the cadence renews on the retrieve.

An ideal jerkbait is neutrally buoyant, powered down into the water by a small or medium-sized lip that gets it into the area where fish are holding.  From there, its allure is generated by the angler wielding the weapon.  Whether ripped in a steady jerk-and-pause pattern, or twitched and danced erratically under the surface with the occasional stop to set off nearby fish, or worked extra slow on those cold front days that are common in spring, giving a moment for the table to be set, so to speak, is key in all of those presentations.  In that pause often comes the strike and the next attempt at motion becomes the hookset.

As effective at catching all predator species as it is at connecting with any one of them in particular, a jerkbait deserves a spot in any spring angler’s tacklebox.  For largemouth and smallmouth bass staging in their spawning areas, it represents an easy meal or an intruding fish.  For walleyes headed upstream, or perhaps back down after their annual run, it’s an opportunity hanging ahead of them for a quick bite.  For pike, well, northerns have never needed an excuse to crush anything that looks like a stunned baitfish.  Depending on the mood of any of these species – save for the always-on nature of the latter perhaps – a jerkbait can be worked to match their disposition and the pauses can be shortened in good weather and times of high activity or lengthened when things are slower and fish are funky with the shifting weather or post-spawn blues.

In a variety of sizes and colors, each different brand and body styling provides something new to work with.  In the end though, it all comes down to how the bait is presented in the water. In addition to experimenting with the lure, watch how it moves under the surface alongside the boat or shore, and take note of how the retrieve sets off any target species. This spring work a jerkbait into any series of staple lures to find a new way to trigger a natural response on a stalled artificial option and vary the cadence and pause length to give fish that perfect medium-rare moment…in our outdoors.