You are here: Home / News / Our Outdoors: On Target 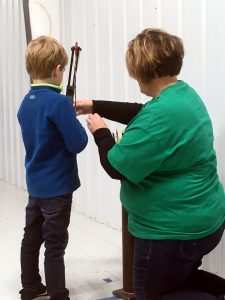 floor which my now six-year-old son straddled in the open shoot section of the archery range. If I didn’t see it myself, I wouldn’t have believed it, but there it was, flung by the half-draw of an excited little boy holding the beginner compound bow with a string so loose it had popped off the top cam just a few shots before.  It was his seventh arrow ever, following a quiver full of shots that bounced off the hard floor, dinged off the post holding a bag style target, and finally a few that issued that feel-good “thwack!” sound and made contact with the block we had moved to.  With smiling mouth agape he turned to me and his volunteer 4-H instructor, Karla, and asked if we had seen it, and we congratulated him and assured him that we most certainly had.

His next several arrows joined his perfect one on the target and he was more than satisfied with the progress he had made in his first 15 shots of what hopefully will be a lifetime of shooting sports when we wrapped for the night.  Pulling the arrows from the foam and with the reminder to keep them points down, he brought them back and walked them out to the main area and deposited them in the holding quivers for other kids to shoot.  His excitement continued to radiate as he donned his coat and hat and we made our way out of the complex into the cold and light snow of the evening, our conversation revolving around the things he’d learned in the thirty minute introduction to archery.
I can recall shooting bow once in my life prior to getting into deer hunting.  Maybe 10 or 11, I was at a week-long Boy Scout day camp at the National Fish Hatchery north of my hometown of Valley City popping colored balloons tacked to hay bales near the canoe launch with a recurve bow alongside my fellow den mates under the warm summer sun.  Finally, when I became a still hunter at the age of 30, I picked one up when I was fitted at a small archery shop near Virginia, Minn.  Thankfully, I’ve been able to experience the excitement, the disappointment, my bonehead mistakes and my favorite memories from time on stand with that bow in my hand giving me a ticket to a new view on the ways of the wild world.  At the very least, the satisfaction of a well-placed handful of arrows in a foam deer target or the block in my backyard has provided enough summer twilight satisfaction to make the endeavor more than worth it. Many times, in the quiet of an autumn evening watching the does and fawns play in the hay field I often sit on the edge of while scanning its perimeter for a buck and waiting for that adrenaline rush, I’ve thought, why didn’t I pick this up sooner?

Regardless of the reasons, I’m better able to share my stories, suggestions and – as my bowhunting goes – mostly shortcomings at this point in my life with my friends, family and hopefully my boys, so that their trip up the learning curve can be more enjoyable and a better understanding can be found on the whole process.  That’s just how it worked out for me; and though at this point I’d probably trade my way with words for the 15 years of experience foregone, I know that he won’t have to.  The important thing realized from the start of his short introductory course is that my son has started on a path that I can help foster and further without being forceful. The fateful fling of a single arrow striking dead center in the blue dot all but sealed the idea in his head that he would indeed be an archer.  Upon our return home, he relayed his account of the evening drawing the bow, letting it go, dinging metal, smacking black foam targets and the one shot that stuck indelibly in both of our memories. Wherever it goes from here, at least I know he’s on target to be ahead of where I have been with the bow…in our outdoors.