The six-hour drive began early, from the southwestern corner of Minnesota to the edge of the Missouri River in North Dakota.  Following a gathering of familiar faces at the banquet for my long-time chapter of Pheasants Forever in Lyon County, an early start was imperative to touch base with folks along the journey and get back at a reasonable hour to get a few other things done.  With the rising dawn and lowered breezes, I fired the F150 up and headed northwest along the two-lane blacktop toward I-29. 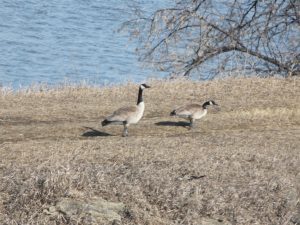 Starting the day along with me, three rooster pheasants sprinted up the ditch bank to the edge of the road and darted back to the dirt of last fall’s field.  In the orange light of dawn their feathers and face patches glowed like the embers of a campfire ready to be re-lit.  With them was at least half of the spark to start a new generation of birds for the coming year.  On down the road a few miles, a group of flushing hens settled into a brushy area alongside the highway providing certainty the other half was out and about as well.

Nearing the South Dakota line and the end of the day’s first hour, I braked hard for a pair of does that bounded across the blacktop and into a farm grove.  On the other side of the trees, dozens of whitetailed deer milled about in the corn stubble, scratching out a Sunday meal in the calm conditions. In every dip and creek bottom, my survey of the roadside area tagged another deer and by the time I angled right and made my way onto the interstate, I had more than five dozen in my count.

While the drive was fairly lonely on the pavement – I passed two cars and was overtaken by two in a 50 mile stretch – the skies were more than friendly, loaded with the migrating light geese that seemed to be in every roadside slough and pond filled to the brim and then some with the meltwater from winter’s last major snow storm.  The dark gray blue geese and bright white snow geese dotted the landscape, with the latter serving as a beacon to the rest of the flocks that were more camouflaged in the dark stretches of flooded farmland and waters which mirrored the incoming clouds of the squall to the northwest.

On seemingly every section of fencing there was a red-tailed hawk or its smaller kin perched and on the lookout for spring.  Some found vantage points on the leafless elm trees in shelterbelts, while others rested atop the green mile-marker signs immediately adjacent to the road. From time to time one would be hopping in the flattened beige grass alongside the pavement.  Shortly after entering North Dakota, I identified two bald eagles perched on a large branch, rounding out a wide selection of raptors that served as spring sentinels on the trip.

Entering Fargo, a sideways blast of snow on the leading edge of a cloudline whitened the air as pairs of Canada geese navigated the gusts and landed in small pockets of water on the south end of the commercial district.  The brief squall lasted until the western edge of town and I chased the sunlight that brightened the hills in the distance along with the flocks of darker geese that once on the ground were staking out their spots for the upcoming nesting season.  On every muskrat hill, beaver lodge, hillock and soaked haybale standing in the field water which was bounded by the last remaining snow drifts and the white line of the blacktop, a pair of Canada geese was ready for the season to start.  In my hometown, along the Sheyenne River, the pairs seemed crammed together as they nervously eyed each other and me as I stopped in at the old house to see my mom before heading west and continuing my roadside survey of spring

All along the trip, the signs were plentiful that the end of winter had come to much of the region, and spring would soon be here for everyone between the beginning of my journey and my destination.  It was a world waking up, tossing off the blanket of snow in exchange for a fresh start, loaded with familiar faces and rituals remembered, ready to make the move into a new season…in our outdoors.