It had been five years since I had been on the Rainy River in northern Minnesota and flung the weight-swivel-circle hook combination full of crawlers in that overhead style of a surf angler, made all the less graceful by the rocking of the current and the wakes of the passing boats that were headed out in search of lake sturgeon with us.  With me to start a new tradition was my friend Tory and his son Gavin.  Now 11, the youngest in our crew was ready to take on the challenges of angling for these prehistoric fish, which have begun to reach epic proportions as their rebound on the Rainy continues after 50 years of recovery since their populations bottomed due to overharvest and wanton waste, pollution of the river system by surrounding industry and degradation of spawning sites in the 1900s. 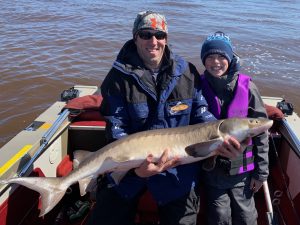 With the river flowing hard into Lake of the Woods, fueled by the spring meltwater from the disappearing snow across the northern stretch of the land of 10,000 lakes, we anchored up on a deep hole and tied on five-ounce no-roll sinkers which made contact with the bottom and bounced through the gravelly substrate before coming to rest in the mud niches where the payload of four or five crawlers on a 5/0 hook would sit, waiting for the sensitive barbels on the sturgeons’ snouts to sense them out.
Fishing for sturgeon in general is akin to an old adage about war and involves outlasting stretches of boredom – and removing the occasional accumulations of riverine debris like washed-down sticks, reeds and grass – to endure a few moments of extreme excitement.  While in our time on the river, which included a good deal of re-education on the finer points of the pursuit and an updated gear list for the following year, our trio was able to take on any slow times with well-spaced fish and plenty of memory-making moments, the first of which came not an hour into the adventure.

Checking a slight bounce in his rod tip, Tory stood up and swept his sturgeon stick backwards and was met with a strong bend and a back wall created by a girthy opponent under the water.  The fish gave up its early advantage of holding on the bottom as it made its way upstream toward the boat; having lost its leverage of the current, it quickly surfaced.  In true sturgeon style though, as soon as its tail touched air a few yards behind the boat, the fish took back all the line that Tory had gained and he set to work on bringing the beast back up.  After a few more minutes of give-and-take, it rolled up to the surface and the dark-gray circle hook flashed in the corner of its mouth as I slipped the net around its scute-covered body.  At 53 inches, it nearly doubled the size of Tory’s first and only sturgeon from several years before.

With the ice broken, we reset our rigs and waited for the next bite, which manifested in the slightest movement in the neon-green end of the large catfish rod employed by Gavin, which was pointing straight out the back of the boat.

“I feel something,” he noted as he tightened the line and swept the spinning rod back, the excitement in his voice growing with each crank of the reel and jump in the rod tip.
After a couple of quick runs, a young 25-inch sturgeon swirled and splashed behind the boat and was quickly in the net and held up by the equally young angler beginning his sturgeon fishing career. 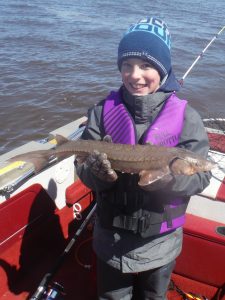 “His first one – no more sturgeon virgins on this boat,” I hollered across the water to the other anglers we had been joking with and cheering in their own tangles with sturgeon big and small throughout the day, and a raucous round of congratulations came back from the crowd for Gavin’s achievement.

I would close out the day with a 35-incher coming late in the afternoon to join my fellow anglers in a successful start to our two-day session on the river, matching many of the boats in the area around us with a few fish, some fun memories and the exhilaration of being back on the border water.  The unpredictability of the growing angling niche and our unpreparedness, however, would amp that excitement level up the following day and provide yet another lesson and an incredible save by my boatmates…in our outdoors.

Check in next week for the story’s exciting conclusion in Our Outdoors: Return to the Rainy (Part II).