Those days when overcast conditions settle in well before dawn provide a unique time to be outdoors, particularly during deer season.  The lack of the pinks and oranges streaking overhead from the eastern horizon and lighting up the sky early makes the anticipation of first legal light even more excruciating, despite the moment being governed by the time on my watch and not by what can be seen on the landscape. The dim grey of a foggy dawn, with clouds hanging so low you can’t tell where the sky ends and the land begins is like something out of a spooky movie.

Such a dawn came on the first Saturday of deer firearms season. With my back positioned firmly against a rise along the western shores of a small water body on a wildlife management area, I squinted in the darkness, with the quarter moon occasionally appearing as a white circle of light through the thickening clouds overhead and the ebbing and flowing fog which rose from behind me. The whisps of mist climbed up the hill and spilled down into the small valley below, forming an uphill flow on the slight eastern breezes which filled the ravine of buckbrush, cattails and ribbon of creek with yet another element of cover for the deer I hoped to see, whenever I’d be able to see them. The damp cold that came with it forced my thinly gloved fingers into my handwarmer pouch, and I set my rifle across my lap in anticipation for whatever light would come.

In the foggy conditions, even the morning activity of the birds I’ve come to expect was muted.  The flutter and dee-dee-dees of the day’s first chickadees were few and far between.  The gurgle of nuthatches was delayed.  The general flit of other little brown birds was minimal and the morning door-to-door search of the knocking downy woodpeckers was nonexistent. Still, under the cover which the low ceiling provided, I was hopeful to see larger animals on the move in the familiar setting, but one that I had never hunted for deer before. 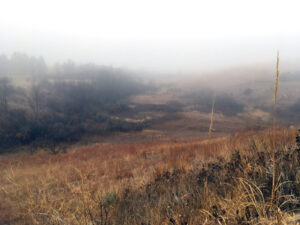 Through squinting eyes, I strained to determine if the bush on the far range of my visibility was a deer or not.  Two or three times I went back to it through my binoculars in the half light to be certain that what I had seen in the fog was what was actually there, forgetting that I had already checked it, as the slight spike of adrenaline spurred reconfirmation.  I noted how funny it was that the dimness makes every branch look like a five-point antler and how the haze turns a fallen bough between two trees into the curving back of a deer. Lowering my optics after the third check of all things on the landscape, I looked at my watch and the last seconds ticked away to the opening moment of the day.  Sliding the wrist of my glove back over the timepiece, I looked up to see a shadow standing in the meadow 80 yards away.

There was no guessing at the large form which had somehow sublimated undetected in the middle of the grassy stretch as internal alarm bells went off in my brain, arms and hands and I raised my reticle to my eye.  Big and dark, the mist-shrouded deer lifted its head and I had to squint, even in the light-gathering ability of the scope, to make it out as my heart began to pound.  The flick of a large white tail confirmed it was not one of the mule deer that occasionally moved through the area from the surrounding butte complexes and I struggled to get beyond the animal’s ears.  Even focusing hard, I couldn’t make out antlers, and slowly came to the conclusion it was a large doe, made bigger by the fog which wrapped around her.  This fact was further cemented as two more antlerless whitetails came out from the tree line and joined her on the way over the grassy rise and to the next set of pines.

Briefly, the fog lifted at the height of the land, and the trio was clear for just a moment before they slipped down over the cusp and disappeared into the trees.  It would remain overcast for the majority of the morning, the fog only receding in time for the hike back to the truck. With it, seemingly too went the prospects of other deer in the area as only the chatter of a magpie and the rustling of some unseen small mammal in the brush below were left, as the slow start to morning finally broke…in our outdoors.