You are here: Home / News / Our Outdoors: Summer Slabs 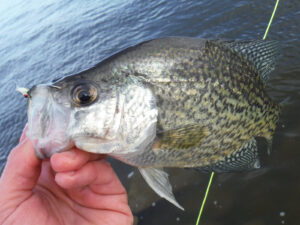 Whether tucked in along a late summer weedline, pinned up against a steep break along a shoreline channel edge, or suspended off a pile of debris behind a bridge piling picking off the bits of food that flow by, many of my late summer angling adventures have been defined by schools of crappies in these places and others.  From a basket full of eaters to a selection of slab sized monsters with mouths that rival those of their contemporary largemouth bass, in the dog days, a quick dip of a tube or a small marabou jig has been the ticket to many memories that blur into the orange-blue sunsets of the August evening. Seemingly always there with the warming of the water and the setting of the sun, crappies make for fantastic action when it becomes tough to turn fish of other species.
Actively Seeking
This time of year, crappies are aggressive and hungry and often aren’t hard to find.  Keying in on the abundance of small baitfish, these large-eyed panfish are out for a fast meal, and schools of minnows and other small fish that relate to structure – such as the well-established weedlines that connect the edge of the shallows to deep water – are often the target.  Offerings should match the hatch, upsizing where bigger crappies are present, and make sure to mimic what fish are feeding on.  Silver and white tubes do a good job of representing small baitfish, and those jigs with spinners and flash also help give off the living flicker of a summertime snack that triggers a bite.  Work baits quickly throughout the column, counting down each offering to find where fish are, and note that as light begins to wane in the late evening, fish may move up and chase prey closer to the surface, shortening the descent required for a bite.
Go Light
Light and ultralight rods are the ticket to picking off summertime crappies of both the black and white varieties.  Spool a small reel with four-pound-test monofilament or fluorocarbon line, particularly options that have limited stretch and better telegraph the sometimes-subtle take of a hungry crappie in haling a bait.  When working a jig, keep the line semi-tight to detect the bite, and set the hook with a quick snap of the wrist.  After a summer of baseball-swing hooksets for bass, muskies and walleyes, remember that only a little pop is needed for a crappie, and too much force will pull the hook straight through the fish’s mouth.
Get Exploring
Crappies can be anywhere on a warm summer water, but identifying structure often helps get things going in the right direction.  Bridges, drop-offs, timber piles and the turns and pockets in dense weed edges are great locations to look into and explore with a number of casts from various angles.  Keep an eye on sonar displays for small arcs around these areas and others, noting that wind may drive feeding schools of crappies as their prey is blown around with the moving water.  Once a summer haunt is located and slabtastic success is achieved, mark the spot on a GPS and come back next season, as the pattern typically plays out year after year.
Just as the season opened with some incredible spring fishing for crappies in favorite pre-spawn spaces, summer closes out with some fast-paced action for specks in favorite places as well. Keep tackle simple and on specification with the things crappies are eating, and enjoy the sensitivity and challenge that light rods and lines can provide.  Ultimately, use this time of year to find a fun feature on a lake that holds crappies and keep going back to it until the first fall winds switch things up, and remember it for next year.  With these ideas in mind, make summer slabs a part of the last few weeks of the season…in our outdoors.